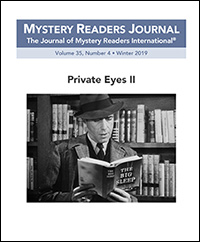 The Scariest Detective
by Alison Gaylin

Want to make writing even tougher than it is? Create a series featuring a private investigator with perfect autobiographical memory.

The Brenna Spector detective series consists of three books, which came out in 2012, 2013 and 2014. And though I usually say yes when asked if I plan on writing more Brenna books (I am, really!), the idea fills me with dread and feelings of inadequacy. To put it simply, I’m not good enough for Brenna.

I didn’t always feel that way. When I first came up with the idea for the series, I thought it was the perfect means for me to write in a genre I’ve long admired. From Sherlock Holmes to Philip Marlowe to Kinsey Millhone to Tess Monaghan, fictional private detectives have always fascinated me as a reader — for their strengths as well as their weaknesses. Operating outside the by-the-books world of the procedural and with more limited resources, the fictional private eye by necessity relies on qualities like street-smarts, spontaneity and determination when solving a case, often going outside the law and putting themselves in danger. And that “bad” behavior is always in character. Whether or not they’ve done respectable work in the past, these legendary PIs are very often outsiders, haunted by an event or a loss or simply unable to play well with others. Understood by no one save that even-more-insane sidekick or that one-in-a-million significant other, my favorite fictional PIs are never perfect, which makes them all the more compelling.

So when I saw a magazine article back in 2008 about a recently discovered condition called hyperthymesia, I immediately thought it would be an ideal hook for a fictional private detective. First identified in 2006 and also known as S.A.M. (superior autobiographical memory), it is, quite simply, the inability to forget anything, ever. Unlike photographic memory made famous in The 39 Steps, it’s not a superpower but more of a curse, in which the person affected remembers every single day of her life in perfect detail and with all five senses. While I imagined it would help someone solving a cold case — particularly if they happened to have been in the area where the crime was committed — I also felt that it brought new meaning to “the haunted detective.” For the character I would create, the past would never fade. Rather, it would be a constant and often intrusive companion.

When I sold the idea for the series, I was thrilled. And I must say, challenging as it was, writing the first Brenna Spector book, And She Was, was a lot of fun. In addition to having Brenna use her unfailing memory to solve a case that had taken place in a town she’d been in years earlier, I was able to explore the idea of memory in general — particularly the ways in which it torments and oppresses us.

But once I had to write the second book, and the third, I felt tormented and oppressed for entirely different reasons. Here I was, writing a series about a detective with infallible memory when my own memory is anything but. Factor in my choice to make the entire series take place over a period of three months, and, despite rereading the previous books as much as I could… let’s just say mistakes were made. My premise turned out to be a copyeditor’s nightmare, and I found myself trying to fix unforgivable inconsistencies on second and third drafts.

My most recent three books have been standalones featuring multiple protagonists, all of whom have fallible memories. I’ve done that on purpose. As difficult as they’ve been to write, it’s truly a relief working with narrators who are just as unreliable as I am.

I do miss Brenna, though. So, in my most recent book, Never Look Back (HarperCollins, July 2019), I decided to bring her back… sort of. While Brenna does appear in the story, she’s only seen at a distance. Her now-husband, the non-hyperthemestic police detective Nick Morasco, plays a more integral role in the action. And though Brenna’s perfect memory is discussed by other characters, I don’t go inside her head — not once, not even briefly. I hate to say this, but it’s too scary in there.

Alison Gaylin’s 2018 book, If I Die Tonight (Wm. Morrow), won the 2019 Edgar for Best Paperback Original. A graduate of Northwestern University and of Columbia University’s Graduate School of Journalism, she lives with her husband and daughter in Woodstock, New York.

Why I Love PI Novels
by D.P. Lyle

I’m not a PI, nor do I play one on TV, but I do love PI crime fiction. Cops can be cool, and memorable fictional characters, but PIs seem to come in more and quirkier flavors. Some are tough, ex-military types, others seemingly everyday people with a knack for sniffing out wrongdoing, and still others are little old ladies with cats. The latter tend to be the smartest and toughest. It’s this great variety of characters that make reading PI stories so much fun. They tend to be more eccentric and possess different skills — even if they aren’t initially aware of them — than do most cop characters. And they all seem to break the rules with impunity. How much fun is that?

The fictional PI world is populated with iconic names: Holmes, Spade, Marlowe, Millhone, Hammer, Archer, Spenser, Cole, Bosch, Robicheaux, Rawlins, Cross, Drew, Drummond, Poirot, and so many others. Meeting such folks is why reading PI novels is so rewarding. And so much fun to write.

Each of my four thriller series features a private investigator, of sorts. None are what you would call a normal, licensed PI but each serves that function one way or the other. And they are very different characters.

Samantha Cody is an example. In the series of three books that feature Sam (Devil’s Playground, Double Blind, Original Sin), her profession changes. Early in the series, she’s a cop in a small town in the California desert, but after she loses that job she becomes involved in investigations, not professionally, but rather mostly for friends. Sam is also a professional boxer. She’s not that big but she’s tough and hits hard. She ultimately gives up that dream still undefeated. Too much wear and tear on the body is her take. Many fictional private investigators began as cops, most notably Michael Connelly’s Harry Bosch and James Lee Burke’s Dave Robicheaux. So Sam followed a traditional path.

My next series features Dub Walker (Stress Fracture, Hot Lights Cold Steel, Run to Ground). Dub doesn’t come from law enforcement. At least not in the traditional sense. He was an MP during his military years and later worked at a forensic science lab. He possesses a deep understanding of forensic science, crime scenes, and criminal behavior. He’s published several books on these subjects and basically works as a hired investigator for difficult cases. Each of the three novels featuring Dub unfolds after he is brought in as a consultant on a perplexing case.

Jake Longly, the protagonist of my series of comedic thrillers (Deep Six, A-List, Sunshine State, and the upcoming Rigged) is a reluctant PI, being dragged into that world kicking and screaming. Jake is an ex-professional baseball player. Pitcher for the Texas Rangers with an overpowering fastball. Until a rotator cuff injury derailed his career. Then he purchased Captain Rocky’s, a bar/restaurant on the sand in Gulf Shores, Alabama.

His current life goals are running his bar and chasing bikinis. Worthy aspirations to Jake. His father Ray feels otherwise. Ray has some murky background in the US military world of black ops and now runs a PI firm in Gulf Shores. He can’t understand why Jake won’t work for him and is constantly attempting to drag Jake into his world. Jake’s refusal creates tension, to say the least.

Jake has a girlfriend. Nicole Jamison. Insanely beautiful, but no bubble-headed bleach blonde. Not even close. Smart, clever, tough, and she doesn’t suffer fools well. Like Jake. And she works for Ray, sort of. Jake has a best friend —Tommy “Pancake” Jeffers. Big doesn’t cover it. His hair is red and his ability to take in massive amounts of food legendary. Most people think he got his nickname from his ability to demolish a stack of pancakes, which of course he can, but as a star offensive lineman in his youth, he was famous for pancake blocks — those that flatten the opponent. Pancake actually does work for Ray. He possesses crazy computer skills but also knows how to handle almost any confrontation. Ray, Pancake, and Nicole have a knack for ensnaring Jake in things he wants no part of. Therein lies the comedy.

My new Cain/Harper series features Bobby Cain and Harper McCoy, a non-biologic brother-sister team. They grew up in an itinerant criminal “family” that traveled throughout the Southeast living off the land, doing odd jobs like construction and landscaping, and putting on shows where dancing, singing, skits, and the sale of homemade trinkets helped pay the bills. But the family also steals and runs scams. Bobby came to the group at two months of age when he was scooped up from a Houston bus station where he had been abandoned by his mother. Harper, a year older than Bobby, was purchased from her alcoholic, half-Cherokee mother for $200 and a couple of bottles of whiskey. They were raised by the family, but mostly by the couple known as Uncle Al and Aunt Dixie.

Bobby was given his first knife at age four, and quickly became a master of the weapon. Mainly throwing. By age seven, he was known as Bobby Blade and was the star of the family’s shows. Harper was often the target, as she held balloons, coins, and even spun on a wheel while Bobby hurled blades her way. Bobby was also trained in hunting and in second-story home invasions. He could get into and out of almost anywhere without being detected. Even occupied homes while the owners slept.

Harper was a natural scam artist. She could play almost any role, cry on cue, and pick your pocket, or purse, while you were looking right in her sobbing face.

When Bobby was 12, Harper 13, the FBI took down the family with a handful of warrants from a half a dozen states. Bobby and Harper were adopted by separate families and lost contact for 15 years. Until their paths crossed, during a back ops mission, on the other side of the world. Harper was with the CIA and was running the op. Cain, a skilled assassin who employed his B&E and knife skills to perform missions that don’t exist, was brought in at the last minute after the mission morphed into something requiring his special brand of stealth.

They both left military work shortly afterwards and are currently private contract fixers. Like PIs, only much more. They make a formidable team. They are smart, tough, skilled, and not shy about dispensing bodily harm when necessary. In their first adventure (Skin in the Game, 2019), they are tasked with locating a missing Vanderbilt University student who is the granddaughter of a retired Air Force General. This leads them to a small, lakeside Tennessee town and into the world of a dark and deranged killer.

I think the great variability in characters who are private investigators makes for great stories. And as a writer, excellent fodder for character creation and storytelling. It’s why I read PI novels and why I write them. As do many of my fellow authors.

In addition to writing award-winning mystery novels, D.P. Lyle teaches and writes about creative writing and medical forensics. He has been an advisor on many mystery TV series, and written tie-in books. He is a cardiologist in Orange County, California.