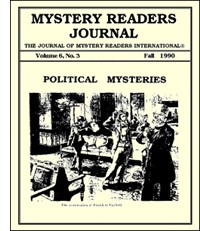 Politics can be defined as the science of how who gets what, when and why. In this sense murder could be seen as the ultimate political tool. Novels of espionage and intrigue show agents in the international arena often resorting to this extreme solution. In the world peopled by spies, terrorists, and double agents, murder becomes assassination. However, domestic politics is less often the scene for murder; although motives may be abundant, the excessive visibility of politicians and current levels of security make dirty tricks more likely. Although politicians may not ordinarily use murder to eliminate their opponents—in real life or in fiction, the passion which surrounds political activities and the importance of reputations and public images make politics a setting ripe for blackmail and other nefarious dealings, even murder.

Marilyn Wallace turns the controversy of a female presidential candidate into a murder mystery in Primary Target (1988, Bantam). Here the threat centers in a radical political group called The Brotherhood of Men which uses threats and bombs to express its political opinions. Smoke and Mirrors (1989, Simon and Schuster) by Barbara Michaels is also set in a political campaign; Congresswoman Rosemary White Marshall wants to be the next Senator from Virginia but the threats to her come from closer at hand. A series of mysterious and dangerous fires spring up around her and a key staff person dies mysteriously. In both books the campaign must go on while the source of the danger is located. Barbara Michaels’ protagonist Erin Hartsock makes a plea for trying to penetrate the “smoke and mirrors, deception and image” of politics: “if you don’t like the way the world, or the political process, functions, then do something about it!” Nor does danger deter Wallace’s candidate Jean Talbot from continuing her bid for the Presidency or her advocacy or women’s rights.

Two Presidential offspring have made careers writing political mysteries. Margaret Truman examines the stabbing of the Senate majority leader (Murder on Capitol Hill, Arbor, 1981), the murder of a Secretary of State (Murder in the White House, Arbor, 1980), the poisoning of the British Ambassador (Murder on Embassy Row, Arbor, 1984), and the appearance of a dead body in the chair of the Chief Justice of the Supreme court (Murder in the Supreme Court, Arbor, 1982). Each of her other five mysteries is also centered on a Washington institution—the CIA, the Smithsonian, the FBI, and the Georgetown neighborhood—and the investigations must be conducted within the limitations of the political world of Washington. Her most recent title, Murder at the Kennedy Center (Random House, 1989) is also her best. Set in the Presidential campaign of Democratic Senator Kenneth Ewald, it introduces the sleuthing partnership of law professor Mac Smith and Annabel Reed. This appealing twosome—and it is hoped along with Mac’s Great Dane Rufus and his private detective Tony Buffolino who stretches the expense account to new lengths—will continue investigation in Murder at the National Cathedral (forthcoming). In their first adventure, they must help clear Senator Ewald’s son of involvement with the murder of a campaign aid with whom he was also having an affair. The plot is complicated by the scheming of a deposed Panamanian dictator and his American ally, a right wing evangelist.

While Truman’s books use fictional characters in a realistic setting, Elliot Roosevelt places Eleanor Roosevelt and the members of her husband’s administration at the center of the action of his books. In fact Eleanor, often with the advice, if not consent, of President Roosevelt, is the amateur detective of her son’s books. And each book is enlivened by the appearance of its bit players, including Winston Churchill, J. Edgar Hoover, Joan Crawford, Tallulah Bankhead, and Nelson Rockefeller, among others. These true-to-life characters are not necessarily given a sympathetic portrayal. One of the most idiosyncratic portraits is that of the official housekeeper Mrs. Henrietta Nesbit; described as a severe woman, her culinary specialty seemed to be tuna fish salad and she preferred to hold the President and his guests to her standards and schedule rather than vice-versa.

Although current security measures may have transformed the White House into a modern fortress, Roosevelt reminds us of the “tradition that the White House grounds are a sort of public park to be enjoyed by the people of Washington.” (Rose Garden) Therefore, the accessibility to a murderer and the list of suspects is more open in a 1940s setting than in a contemporary one. His titles may takes us on a tour of the White House much as Sue Grafton’s are taking us through the alphabet.

Although the murders in this series are fictional, the settings are quite realistic and the reader learns much about the politics of the 1930s-40s as seen through the eyes of the First Lady. The most recent title, Murder in the Blue Room, is set in 1942 and paints a vivid picture of wartime Washington complete with Victory gardens and patriotic skirt lengths (short to conserve fabric). As Eleanor Roosevelt assembles all the suspects in the Cabinet Room to reveal the mystery’s solution, President Roosevelt is learning of the successful resolution of the Battle of Midway. In addition, several of the books take note of Mrs. Roosevelt’s concern for the equality of women and “Negroes.”

Politics is made up of conflict, between opinions and individuals. At the end of a campaign, there is a winner and a loser, but we do not expect to find any dead bodies. And we expect legislative debates to end in compromise rather than loss of life. Although murder is a final solution, it really is an impractical political alternative. The books mentioned above are interesting because they place a mystery in an unexpected location.

A murder in real life requires only one murderous individual, but a murder mystery, a whodunnit, requires a whole cast-list of at least potentially murderous people. It helps, therefore, to set your book in the sort of environment where unpleasant men and women tend to congregate. Big business springs to mind, but for myself, unable to understand the principle behind even stocks and shares, that setting inevitably has to be left to the Lathen ladies. Academia is another possibility (more naked ambition and intellectual dishonesty there than most people would deem possible), and so are theatre and opera companies. But for its ability to attract unpleasant or hollow people to it, politics must rank very high.

I worked briefly in the late fifties for the Fabian Society, so I encountered a fair number of politicians then. The Labour Party had been out of office for some time, and squabbling was endemic. There are distinct signs that prolonged office is producing something similar in the Tory Party at the moment—that, combined with a dawning realization that Mrs. Thatcher might conceivably be mortal. There is no honor among thieves, and certainly none among politicians. Even the most mediocre nourish delusions of grandeur, and who knows but that they are right: the history of our two countries in the last thirty years or so has frequently seen mediocrity triumphant.

My first political book I set in a by-election in a Northern English constituency. It didn’t go down too well in the States—perhaps because you in the United States virtually don’t ever have by-elections, and all sorts of things about the British political process seemed strange to American readers. But the focusing of the media on the one constituency always produces ludicrous excess in politicians, both the local hopefuls and the visiting great ones, and I think the book works quite well both as comedy and as a comment on our political system, albeit on a fairly light-hearted level. I was quite pleased to be able to introduce the Prime Minister as a minor character without ever giving any indication of sex.

I have just finished another book with a high political content, though this time I think there will be little that seems strange to an American audience. It is called A Scandal in Belgravia, and it centers on a recently dismissed cabinet minister, looking back on the death of a homosexual friend in the ‘fifties, the time when the Foreign Office in Britain was riven and discredited by a series of spy scandals. Spying is not in question here (nor will it ever be in any book of mine), but the change in attitudes to sexual minorities is. It was important to make my politician a Tory one, because the Conservative Party has been rocked by so many sexual scandals in the last few decades. Though the dead man whose murder is at the core of the book was in fact a civil servant/diplomat, his family was an aristocratic one, his father a government minister, and therefore politics is always in the background of the book and politicians feature prominently, not as a rule in a very credible light.

For the fact is that, though many go into politics for idealistic reasons, more do not. And the idealism is usually chipped away by circumstances, temptations, worldly pressures of all sorts, so that your average cabinet is a motley collection of greasers, arse-lickers, ideologues and self-promoters. Very useful, delightfully useful, for a crime writer. Long may politics attract to itself the very worst elements in our society!