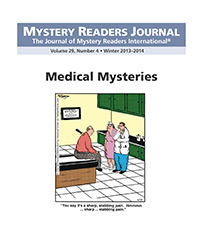 Medical Malpractice in Mysteries and Thrillers
by D.P. Lyle, MD

Too often, fiction writers commit medical malpractice in their stories. I see it all the time, and unfortunately, these mistakes can sink the entire story. The ones I repeatedly see include:

Bang, Bang, You’re Dead. Not so fast. No one dies instantly. Well, almost no one. Instant death can occur with heart attacks, strokes, extremely abnormal heart rhythms, cyanide, and a few other metabolic poisons. But trauma, such as gunshot wounds (GSWs) and blows to the head, rarely cause sudden death. Yet, how often has a single shot felled a villain? Bang, dead. For that to occur, the bullet would have to severely damage the brain, the heart, or the cervical (neck) portion of the spinal cord. A shot to the chest or abdomen leads to a lot of screaming and moaning, but death comes from bleeding and that takes time. Sometimes, a long time.

Ask an emergency physician or nurse. GSW victims reach the ER with multiple holes in their bodies and survive all the time. This is particularly true if it’s Friday night (we called it the Friday Night Knife and Gun Club), during a full moon (yes, it’s true, a full moon changes everything), or if the victim is drunk. You can’t kill a drunk. That’s a medical fact. They survive everything from car wrecks to gunshots to falling off tall buildings.

Sleeping Beauty. I call this the “Hollywood Death.” Calm, peaceful, and not a hair out of place. As if simply asleep. Blood? Almost never. The deceased is nicely dressed, stretched out on a wrinkle-free bed, make-up perfect, and with a slight flutter of the eyelids if you look closely. Real dead folks are not so attractive. I don’t care what they looked like during life, in death they are pale, waxy, and gray. Their eyes do not flutter and they do not look relaxed and peaceful. They look dead. And feel cold. It’s amazing how quickly after death the body becomes cold to the touch. It has to do with the loss of blood flow to the skin after the heart stops. No warm blood, no warmth to the touch.

Sleeping Beauty also doesn’t bleed. You know this one. The hero detective arrives at a murder scene a half hour after the deed to see blood oozing from the corpse’s mouth or from the GSW to the chest. Tilt! Dead folks don’t bleed. You see, when you die, your heart stops and the blood no longer circulates. It clots. Stagnant or clotted blood does not move. It does not gush or ooze or gurgle or flow or trickle from the body.

Trauma? What Trauma? You’ve seen and read this a million times. The hero socks the bad guy’s henchmen in the jaw. He goes down and is apparently written out of the script, since we never hear from him again. It’s always the henchmen, because the antagonist, like most people, requires a few solid blows to go down. Think about a boxing match. Two guys that are trained to inflict damage and even they have trouble knocking each other out. And when they do, the one on his back is up in a couple of minutes, claiming the other guy caught him with a lucky punch. Listen to me. Only James Bond can knock someone out with a single blow. And maybe Mike Tyson. A car-salesman-turned-amateur-sleuth cannot.

And what of black eyes? If a character gets whacked in the eye in Chapter Three, he will have a black eye for two weeks, which will likely take you through the end of the book. He will not be “normal” in two days. A black eye is a contusion (bruise) and results from blood leaking into the tissues from tiny blood vessels, which are injured by the blow. It takes the body about two weeks to clear all that out. It will darken over two days, fade over four or five, turn greenish, brownish, and a sickly yellow before it disappears. On a good note, by about day seven, a female character might be able to hide it with make-up.

Similarly, what of the character who falls down the stairs and injures his back? He will not be able to run from or chase the bad guy or make love to his new lover the next day. He will need a few days (or maybe weeks) to heal. And he will limp, whine, and complain in the interim. And if he breaks something, like an arm or leg, he’ll need several weeks to recover.

I Can Run, and Jump, and Fight Like an Olympian. The typical fictional PI (maybe real ones, too) drinks too much, smokes too much, and eats donuts on a regular basis. He is not training for the Olympics. He will not be able to chase the villain for ten blocks. Two on a good day. And hills or stairs will reduce that to a very short distance. Yet chase montages in movies and books often seem to cover marathon distances. And then a fight breaks out.

Of course, some characters can do all this. Not the PI mentioned above, but maybe Dustin Hoffman can. Remember “Babe” Levy (Dustin Hoffman) in Marathon Man? He had to run for his life as Dr. Christian Szell (Sir Laurence Olivier) and his Nazi bad guys chased him endlessly. But early in the film we learn that he runs around the reservoir in Central Park everyday. He constantly tries to increase his distance, improve his time. He could run for his life.

Hopefully when you run across medical malpractice in your reading you’ll be forgiving and enjoy the story anyway. But maybe not.

D.P. Lyle is the award-winning author of numerous non-fiction works, as well as the Dub Walker and Samantha Cody thriller series. Along with Jan Burke, he is the co-host of Crime and Science Radio. He has worked with many novelists and with the writers of many TV shows ranging from “Law & Order” to “Pretty Little Liars.” Blog: writersforensicsblog.wordpress.com

There are movie thrillers galore with medical themes, but in this column I’d like to celebrate the unsung heroes of television crime series: the medical examiners.

An autopsy is required in every unexplained death, and the autopsy report is critical evidence in every murder case. So it makes sense to feature the medical examiner as an ongoing character—even the central protagonist, in series such as “Quincy” and “Crossing Jordan,” or detective partner, as in “Rizzoli and Isles.”

But I’m more interested in the M.E. as a stalwart part of the larger team. From 1992 to 2011, Dr. Elizabeth Rodgers, played by Leslie Hendrix, appeared in over 250 episodes of “Law & Order” and its spinoffs. She was weary, sardonic, and the consummate professional, yet the character remained two-dimensional. I suspect that at the end of the day, she hopped in a morgue drawer until it was time to start all over again.

Other shows give the M.E. a bit more of a life, while taking the opportunity to diversify the team. On “The Closer,” we find that Dr. Morales (Jonathan del Arco) worked overtime as a standby doctor for an LGBT community event. He continues to snark at the team on “Closer” spinoff “Major Crimes.”

Actor Robert David Hall, who lost both legs in a car accident, plays the meticulous and unflappable Dr. Al Robbins on “CSI: Crime Scene Investigation.” His disability is rarely referred to unless relevant to the plot, as in one or two episodes where he was assaulted and had to swing a crutch in defense. We know Doc Robbins is a devoted family man, and one episode is set in motion when he tries to get a family tree made as a present for his wife.

On “CSI: NY,” former surgeon Dr. Sheldon Hawkes (Hill Harper) started as the show’s M.E., but proved so popular that he transferred to the crime lab as a integral member of the team. Over time, we learn a lot about his life and character, as in the episode where he lost all his money in an investment scam. Dr. Hawkes may be the only M.E. with his own racy fan fiction page.

After Dr. Hawkes moved up, “CSI: NY” brought in Dr. Sid Hammerback (Robert Joy). Here we have the contrast between the M.E. and the investigators dialed up several degrees. From his goofy click-together glasses to his multiple hobbies, Sid (rarely referred to as Dr. Hammerback, which tells you something right there) is an eccentric, protean character. He ends up selling one of his inventions for millions of dollars in the next-to-last season of the show, but in the last season we find he has non-Hodgkins lymphoma.

My personal favorite M.E. of all time is, of course, Dr. Donald “Ducky” Mallard. OK, the name is cheesy, but David McCallum is caviar in the role of the voluble “NCIS” M.E. He talks to the cadavers, he tells endless stories of his past, he explains what needs no explanation, all with wit, warmth, and veddy British attitude. Until recently, Ducky lived with (and cared for) his slightly ga-ga mother and her gaggle of Corgis, but never let that stop him from pursuing any attractive, available, lady-of-a-certain-age. This is a character I would love to have tea with. Fortunately the show, and 80-year-old McCallum, are still going strong.

Just to get their money’s worth out of their medicos, writers love to use the M.E. as a romantic interest for their lead detective.

In the first three seasons of the Murdoch Mysteries, Sgt. William Murdoch (Yannick Bisson) gradually becomes attached to Dr. Julia Ogden (Helene Joy). Her tenure as medical examiner in Toronto, Ontario, is remarkable because the series is set in the late 1890s, when very few women were allowed to enter or complete medical school. I highly recommend seeking out this series on Netflix DVD or streaming video for some binge watching. The interplay of characters is highly appealing, and the treatment of social issues both historical and modern is thoughtful.

Inspector Morse (John Thaw) had to settle for a professional relationship with pathologists Dr. Grayling Russell (Amanda Hillwood) and, later, Dr. Laura Hobson (Claire Holman). The likeable, if sometimes cranky, Dr. Hobson continued her role in the spinoff series Inspector Lewis. After six years of deepening friendship, she and Lewis (Kevin Whately) walked off into the sunset together in the final episode.

The course of love does not always run smooth, however. Pathologist Molly Hooper (Louise Brealey) carries an unrequited torch for Sherlock (Benedict Cumberbatch). He takes advantage of this when it suits him, but Molly knows very well she is destined to frustration.

In “Da Vinci’s Inquest,” coroner Dominic Da Vinci (Nicholas Campbell) must work with his ex-wife, Dr. Patricia Da Vinci (Gwynyth Walsh), who is a pathologist in the same Vancouver, British Columbia, department. Sparks fly, but the romantic interest is long gone. This series is an absorbing, complex, unforgettable depiction of the people who speak for the dead. Only three of eight seasons are available on DVD or streaming video in the US, but they are richly worthy of your time.