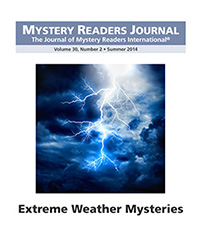 Let It Come Down
by Timothy Hallinan

Banquo: It will be rain tonight.
First Murderer: Let it come down.
—Shakespeare, Macbeth

To the north the sky grows even darker and the world disappears, as it has for weeks, in a shroud of rain: the worst monsoon season in sixty years, a huge blunt-force weapon a quarter of a country wide, striking wherever it pleases, filling and overfilling dams, swelling rivers, flooding entire towns, heedless of human life, human dreams, human prayers.

Those words are taken from Chapter One of my 2012 Poke Rafferty Bangkok thriller, The Fear Artist. Although they appear early in the book, they came to me very late in the writing process. They were part of a large-scale reinvention of the book’s world that was prompted by extreme weather—the disastrous monsoon of 2011 that flooded so much of Thailand, including large areas of Bangkok. The monsoon was so important to the development of the book’s story and themes that I’ve decided to use it as the example for this piece. It’s not just BSP. Honest.

What the monsoon provided was a unifying coherence the book had lacked, as well as a huge meteorological “clock” that ticked throughout the story as the floodwaters flowed south from the inundated northeast toward, and then through, the city.

Weather is an aspect of setting, which I think of as the interaction between character and place. If the setting doesn’t affect the characters, doesn’t require something from them or help to shape them and their stories, it’s inert filler, just cardboard scenery. Under some circumstances weather can virtually stand in for the entire setting. It’s an almost mystically powerful element, one to which we respond on a primal, even pre-language level. It’s no accident that some great books have been set during a period of weather run amok; a couple of superlative recent examples in crime literature are James Lee Burke’s masterpiece The Tin Roof Blowdown and the marvelous Joe R. Lansdale’s The Big Blow.

In the case of The Fear Artist, the monsoon and the flooding it caused not only became the story’s real setting but also provided the book’s most important images and gave me the metaphor I needed to examine some aspects of what I turned out to be writing about: the war on terror.

In the first scene, my main character, Poke Rafferty, is accidentally knocked onto a wet sidewalk by a running man, an American. With the man on top of him, Rafferty hears a crack like a distant bat in a baseball stadium, and the man shudders and jerks, and then it happens again. When Rafferty rolls the man off him, he sees blood, and in the last seconds of the other man’s life, he manages to say two things: a woman’s name and the name of an American city. And moments later, they’re surrounded by cops, military officers, and a discreet sprinkling of civilians who, to Rafferty’s eye, look like spies.

Within hours it becomes apparent that a great many people, including some with high rank and obscure powers, want to know—need to know—what the man said to Rafferty before he died. What’s more, they’re not satisfied with his answers.

Through no fault of his own, Rafferty has become potential “peripheral damage” in the war on terror, via some atrocities committed by the Phoenix Program during the war in Vietnam. The Phoenix Program marked the first time the US government methodically killed civilians—in many cases, innocent noncombatants—in pursuit of a military goal. After decades gathering dust in the archives, the Phoenix program was resurrected following the attacks of September 11, 2001, as the the Pentagon, charged with creating a set of tactics to fight terrorism, made it a key element in their plans.

One problem in writing about the war on terror is that, from the perspective of someone who’s up against it, the war is just the sharp ends of the policy, which is to say a few more-or-less anonymous, probably pretty drab people who are threatening, or trying to silence, or even liquidate the target. I needed to maintain a tight focus on that person-versus-person dynamic since, on a practical level, that’s what any protagonist experiences in a book, and I was helped in that task in The Fear Artist by the happy arrival of the worst person I’ve ever written, a former spook in his lethal early seventies named Haskell Murphy. With Murphy on the scene I could sort of sit back and watch him do his stuff, knowing that the thriller dynamics were probably going to frighten even me.

But as effective as that was, it left me without a way to imply the weight, the formless dread, the sheer unstoppability of the war on terror. And then, in the real world, Bangkok started to flood, and I read about it, and it was like being hit by lightning.

It was the perfect parallel: the monsoon is relentless, merciless, enormous, imprecise, uncaring. It rolls over the innocent and the guilty alike. It spares the rich on their hilltops but declines to be diverted from flooding the temple or the orphanage. It gave Rafferty something to experience personally that approximated the scale of the forces that opposed him:

It’s raining again when he comes out; he can almost feel the weight of the swollen river rushing by, several miles to the west. He has an impulse to lift his head and scream at the sky.

As the tension in the book rises, so does the water level in the river. The final collision between Murphy and Rafferty takes place in and around a house that’s got ten inches of black water standing outside it, giving me the last really vivid image in the book:

… the house shudders and blows, sending pieces of burning wood and broken glass twenty and thirty feet into the air, stunning Rafferty motionless as bits of fire arc lazily down through the limbs of the trees and he sees the entire structure reflected upside down, the spirit house of the water gods, afire on the surface of a lake.

Without the monsoon, The Fear Artist would be a much weaker book. Even when I finished it, the monsoon wasn’t finished with me. Two days after I sent the manuscript to my publishers I woke up at about four a.m. and went downstairs and wrote a new ending, one that captures (I think) the sense that the Rafferty has survived his battle but the war still continues:

That night the rain upriver eases for a while…  and the level in the river drops. It’s not much of a drop, and it’s probably only for one night. But it is one night.

If all of this sounds like self-promotion, I apologize. My intent was to demonstrate, from a writer’s perspective, how extreme weather can animate and reshape a book. And, probably, to suggest to aspiring writers that one thing they might do when their book feels like it’s trapped between the margins and that the reader is in no danger of having it slop over into his or her life is to think a little bit about the weather. It can be a phenomenal gift.

Timothy Hallinan is the author of seventeen novels including two current series. The fourth of his Junior Bender Mysteries, Herbie’s Game, will come out in July 2014, and the sixth in the Poke Rafferty series, For the Dead, will be published by Soho Crime in November. Hallinan lives in Los Angeles and Bangkok and is fortunate enough to be married to Munyin Choy.

Before radio, television, and weather satellites, people living along the shores of our eastern states had almost no warning of impending hurricanes. The Galveston Hurricane of 1905, the deadliest natural disaster in our nation’s history, killed some eight to twelve thousand people when the storm surge of fifteen feet washed over the island, where the highest point was less than nine feet above sea level. Wireless telegraphy was in its infancy so few people knew to evacuate, especially since skies were blue almost up to the time the storm struck.

As a child living on a farm about a hundred miles from the North Carolina coast, my mother remembered those blue skies in late summer. Winds would blow steadily for two or three days before storms hit, sometimes bringing rain and sometimes moving on up the coast with no rain and no damage. “The old folks called them the August blows,” she told me, “but they didn’t know what caused them.”

Having lived through a couple of Category 4 hurricanes myself, I drew on all this when I came to write Storm Track, the seventh in my Judge Deborah Knott series. The chapter captions are quotes from a 1900 book titled The Complete Story of the Galveston Horror.

In my book, Stanley Freeman, an adolescent African-American boy, is tracking Hurricane Fran as a science project and it parallels the storm brewing in his own home.

Fran toyed with us for days. First she was a tropical storm, then a named hurricane that was soon downgraded to a tropical depression, then back to a hurricane that almost immediately weakened into a tropical storm. She finally seemed to make up her mind and became a Category 3 hurricane, but by then, our nerves were frayed by the long run-up. Like young Stanley, we weren’t wishing Wilmington or the coast any bad luck, but if she was going to hit, we wanted her to go ahead and make landfall and then collapse as most of our hurricanes do.

Beware what you wish for!

Instead of a glancing blow to Wilmington, she marched up I-40, right over our house around one in the morning and finally collapsed near Raleigh. Rain blew horizontally through our attic vents, damaging the living room ceiling, and under the door into our bedroom, soaking the carpet. Our power was knocked out for almost a full week. This was early September with 95° days and sauna-like humidity. No air-conditioning, no fans. A cousin shared his generator with us, which kept the the freezer cold, but we had to clean out the refrigerator. I had filled our bathtub two days earlier, so we had water to flush with, but none for showers.

Although we lost several trees, none of them landed on our roof. Friends had made a quick dash to the coast to bring their boat inland, only to have a tree land on it here. Another friend put his new luxury car in the garage and left the old pickup out to fend for itself. The pickup was fine. A huge oak smashed through his garage roof and totaled the car. All these incidents found their way into my book.

In the end, as the people in Storm Track begin to deal with the damages of her passing and skies are blue again, Fran delivers final justice to the murderer. It was indeed a killer storm.

Margaret Maron is an MWA Grand Master and winner of the Malice Domestic Lifetime Achievement Award. The 19th book in her Judge Deborah Knott series, Designated Daughters, will be published in August, 2014.